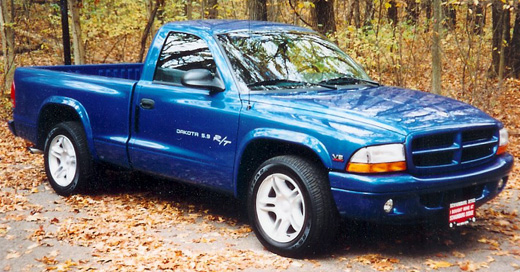 I had 2, this is most likely the 1999. I worked for Chrysler (and still do) and bought a 1999 which was subsequently bought back due to mis-represented towing numbers. The 9" tires would get damaged if you towed over 500 pounds and squatted the rear suspension. I didn't get the Infiniti radio the first time, so I ordered a replacement identical other than that. Sold the 2000 in 2001 because, frankly, I never drove it. I miss those trucks. The 1999 had a K&N in a 4-barrel style round filter, pulleys, exhaust and Lakewood slapper bars because it had wheel hop. The 2000 was actually substantially faster dead stock. The 2000 had a 4cyl frame...I am assuming the weight loss accounts for the speed edge, as well as the fact it hooked and didn't wheel hop like the 1999.

Search The Mopars Of The Month Site: