This page contains information about our site including its history, including 440’s Place, Emailed Mopars, Mopars Of The Month, Mopar Archive and more.

Our site is spin off of a personal mopar enthusiast site named “440’S Place” we originally built in 1996 on a prodigy personal web server. At that time they were not many mopar related sites or resources on the internet.

At first, our site was used to showcase our Mopars and house our collection of photo’s we had taken from past events & shows.

The site quickly outgrew the allowed space that the prodigy service provided. On September 25, 1997 we purchased the 440magnum.com domain and starting moving our site to its new home. In October of 1997 we launched the new site and added a photo section. In January 1998, we started adding mopars to the site from our visitors.

The site continued to grow during 1998 and April we added a new section to the site to house the featured mopars. We named this section 440’S Emailed Mopars, at the time that was the only way to get your mopar added.

We continued to expand on our photo section site adding hundreds of photos from past mopar shows and events. The photo section quickly became the largest all mopar photo archives on the WWW, it also became one of the more popular sections of our site. We also added a Mopar Download section, Mopar screensavers and Mopar wallpaper section, at the time no other Mopar related site offered anything like this. The site begin growing a rate that would soon cause us to out grow our shared hosting.

On April 22, 2001 we purchased the 440magnum-network.com domain and leased our first dedicated server to house our sites. Over the next few years we moved all of our site features including the Emailed Mopars to the new domain creating one of the largest mopar enthusiast sites on the www. The 440magnum.com domain would become our information site for our network. On November 11, 2003 we purchased the dodgedakotart.com domain this would become our first non 440magnum site and the first of our network sites. During this time the we started using the Mopars Of The Month name for the featured section.

The next few years were spent improving the main site and adding new sites to the network. In January 2008 we moved the featured mopars site back to 440magnum.com domain and renamed it to the “Mopars Of The Month”. The site and our network has been running strong ever since. 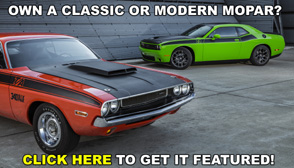